With quotes from Dr. Martin Luther King in italics. 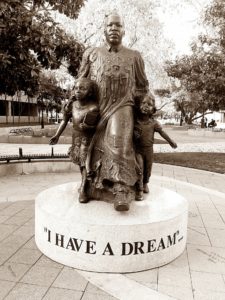 I have a dream that my four little children will one day live in a nation where they will not be judged by the color of their skin, but by the content of their character.

Those were exciting times: times of hope, rocketing progress, moving towards the realization of the Constitution’s true meaning, moving forward, always forward—and upward.

The walls of many Black homes displayed pictures of Jesus and Martin Luther King, in close proximity to each other.  Two saviors, one in the Godly realm, the other in the human realm, but with the spirit of Godliness within. We were secure in the knowledge that life, though not perfect for Black Americans, was getting better and better.  The upward spiral was assured.

We could not predict the groundswell of Americans holding onto the old ways. In 2019, many of us feared that our country was sliding back down the mountainside. But we must not be discouraged by the divisiveness of the past decade. We can invoke the words of Martin Luther King and safeguard his dream.

Only in the darkness can you see the stars.

As a young girl I saw Martin as a hero for me and all Blacks in America.  But as I matured into adulthood, I realized that yes, Martin was an outstanding figure in Black history, but he transcended race; he was a profound figure in American history. His message was universal and timeless.

We may have all come on different ships, but we’re in the same boat now

My ancestors came to America from Africa on slave ships, from Europe and the Caribbean via Ellis Island, and some were already here when the first explorers landed and thought they had discovered  a land that was not lost. Today the port of entry may not be via ocean on a ship. It may be miles on foot, then crawling on belly under a wire fence to freedom.

It’s been my experience that my adult friends from other ethnicities, who do not embody prejudice and racism, were primarily raised as children with meaningful friendships of other cultures. Diversity for them was the norm.

As we enter 2020 we can affirm this spirit to leave divisiveness behind, and we can proactively reach out to communicate with people who are different from us, both culturally and politically.

Martin’s was not a wishy-washy sentimental philosophy. His was a strong conviction, requiring that we back up our beliefs with action.

The ultimate measure of a man is not where he stands in moments of comfort and convenience, but where he stands at times of challenge and controversy, . . . There comes a time when one must take a position that is neither safe nor politic nor popular, but he must take it because his conscience tells him it is right

The challenge for us is to do so without letting hatred into the mix.

I have decided to stick with love. Hate is too great a burden to bear.

As we enter this new decade, let’s reflect on Dr. King’s lessons during his birthday month, and keep climbing.