It’s been over two weeks since the brutal murder of George Floyd and I’m only now able to write about it. My initial response alternated between rage and numbness, as I was catapulted into Black PTSD—in no condition to write a blog that would properly honor Mr. Floyd. I am betrayed once again by my country’s broken promise of liberty and justice for all. 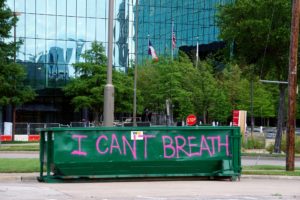 I feel deep gratitude to the seventeen-year-old bystander for the cellphone video that went viral. The call-in by the secondary police officer was cold and matter-of-fact, belying the brutality being witnessed across America in real time. Were it not for the concern and quick action of the surrounding witnesses, this case would probably go unnoticed as a routine stop with accidental death.

My heart is warmed by the police officers who took a knee with those who protested peacefully, a spontaneous gesture of unity in the absence of unifying executive leadership at the federal level.

I give two brief sentences to the looters, not wanting to honor their actions, for they do not honor Mr. Floyd. Although I do not condone the looting, I do understand it as an eruption of rage built up over centuries of marginalized America.

I am inspired and uplifted by the level-headed integrity of the Floyd family.  In the midst of their grief, and surely their anger, they spoke out against violence, and kept their focus on a mindset that would ultimately lead to solutions.

Mr. Floyd was martyred in the cause that would expose to our nation and to the world, the element of police culture that continues to perpetrate harassment and criminal behavior against Blacks. These rogue cops are fueled by their entrenched belief in white supremacy. I am comforted to see the large numbers of White demonstrators who abhor the misdeeds of their own race and stand in unity with their Black brethren to correct the national injustice.

We live in transformative times, but I offer these words of caution: inevitably, “breaking news” will shift to another topic, another issue. We must remain steadfast in our demand for criminal justice reform that will truly impact the systemic mindset and deliver the promise of equal treatment under the law, honoring the memory of George Floyd and those who died before him.

When you empower a woman, you empower an entire community to work toward prosperity and improved livelihoods. This is exactly what we’ve set out to accomplish. Empowered Voices is a non-profit organization established by Kaley Sweeney and Lene Martinsen in 2012. We are currently working on a series of development projects in African villages.