For the past ten years, the Safety Harbor community has been an integral part of my life, and I have always been treated as if my life matters.

I was wholeheartedly in favor of the Black Lives Matter – And Justice For All signs, and when the Commission voted to display the signage on city property, I viewed it as two steps forward.

I was disappointed when, at the following week’s meeting, the decision was rescinded in favor of a generic replacement, and I viewed that as one step back. 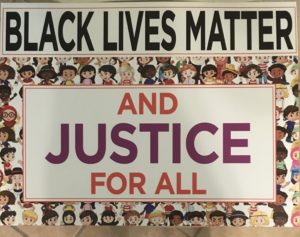 I believe the main issue at hand is a misunderstanding of the concept of Black Lives Matter. Some are labeling it a political issue. In actuality, it is a moral, civil rights affirmation.  Any rhetoric to the contrary dilutes the historical and present-day continuing struggle of Black Americans.

Rather than backtrack and remove the signs, the city could have looked upon this as a teaching moment to educate people as to the true meaning of the principle of Black Lives Matter and its impact on the Black citizens of Safety Harbor.

The momentum is slowed, but it need not be lost. Education and dialogue, based on harmony and respect, are a major key to change. This will take courage on both sides. We live in stressful and emotional times. We are used to preaching to the choir instead of truly listening to others’ viewpoints that differ from our own.

The internet is providing a platform for ugly rants that would not be tolerated face-to-face.

To add to the discomfort, unfamiliar words are being introduced to the national vocabulary: Systemic Racism, White Privilege, White Fragility. These words call for the majority population to do some internal soul searching—an unfamiliar and uncomfortable process.

We are not moving forward as quickly as I might like, but the stumbling beginnings of conversations have started.